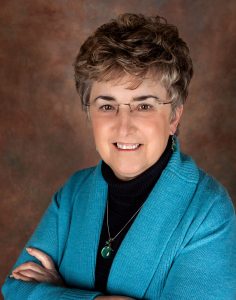 Susan Van Kirk is a writer of short stories, mysteries, and a memoir about teaching. Her first mystery, Three May Keep a Secret, came out in December 2014. Susan and I met on a panel at Bouchercon (I think—I remember the room, but those conference rooms start to blend together, don’t they?) when we were both learning to talk about our first novels. And now she’s here to talk about her second novel in the Endurance mystery series, Marry in Haste, in which a present-day character taps into a past generation to learn about an enduring social problem.

Marry in Haste has two timelines—a complex story to tell. Why did you decide to approach the story this way, and how did the two stories feed into each other?

It always starts with “What if?” In this case, it was, “What if I wrote a mystery about the topic of domestic abuse and examined its nature in two different centuries?” Now domestic abuse and a series that is sometimes classified “cozy” and sometimes “traditional” is a tough call. But I was interested in the laws, the support victims had or didn’t have, and why victims stayed. It is more about PTSD than actual physical violence. 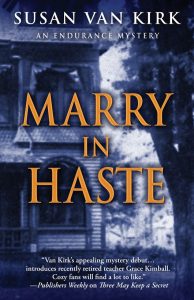 Tell us about Marry in Haste?

Jeff Maitlin, boyfriend of my main character, Grace Kimball, buys an old Victorian mansion in the small town of Endurance. It is in terrible shape, but he plans to renovate it and turn it into a B & B. He and Grace find a diary owned by Olivia Lockwood hidden in the house. She was one of two wives of a powerful judge who built the house, and Grace reads the terrifying story of their marriage and their honeymoon to the 1893 Columbian Exhibition of the Chicago World’s Fair.

In the present day, one of Grace’s former students, Emily Folger, is charged with the murder of her philandering, wealthy husband, Conrad. Grace, of course, can’t believe this, and she sets out to save Emily. What she finds is the dark secret both marriages share: the husbands are abusive. How does this work in 1893, and do abuse victims have any more help in the present day? The two plots parallel each other in interesting ways. Their events have a great deal to say about what causes abuse, what techniques are used by abusers, and why victims stay.

Marry in Haste has at its heart a story about women helping one another. Why is that story important to you?

It wasn’t until I divorced and had three children to raise on a teacher’s salary that I understood why women were important in my life. My mother died shortly after I married, so I never saw that social dynamic in her life. It was the 1950s, and she was always home for my father. But when I found myself alone with overwhelming problems to handle, I turned to a group of women who are still so important that words are hard to find. They have sustained me through difficult times, and I’ve tried to return that favor. Each came into my life at different times, and now the six of us are still very close.

When I created Grace Kimball, I wanted to surround her with a similar circle of friends because she became a widow quite young. Deb O’Hara she met when dropping off things for her daughter at the junior high where Deb was a secretary. Jill Cunningham came into her life because she did the accounts for Grace and her husband, Roger. Many years later, they folded TJ Sweeney into their group, and she is the least likely member. TJ is biracial, beautiful, younger than Grace and her friends, and grew up with many obstacles, the most important of which was the departure of her father when TJ was young. Grace began mentoring TJ in high school and through college. But nothing came easy to TJ, and she forced the city fathers to put her in the police department when she got the highest score ever on the exam. She and Grace have each other’s back, and they always will. Some readers wonder if this is an unlikely relationship, but I would say “no.” They respect each other as women and as friends, and that is all that’s needed.

Congrats on the new book, Susan!

Available for Pre-Order: The Lucky One Click to Learn More