I met Triss Stein at Malice Domestic in early 2015 when we were put on the same panel. It was called “School for Murder,” which suited me just fine because I had a murder mystery set on a college campus. For some of the other panelists, the topic needed to widened up a bit, but we rolled with it and had a good time, as you do at Malice. We had such a good time, in fact, that I had to bring Triss on for three questions for her new book, Brooklyn Secrets, which just came out December 1.

Your Brooklyn series has an obvious locational focus and a feisty protagonist in Erica Donato. Tell us about Erica and what she has in common with Triss?

When I started this series, I wanted a character who was not me but had a more complicated, richer life than the heroine of an earlier short-lived series. She needed to be younger than me, so she would be dealing with the complications of building her life. (Now she’s a lot younger, as it took a long time to get it right. She hasn’t aged a bit but I sure have.) I wanted her to be a native, old time Brooklynite (not me) but with extra perspective (me, a little bit). Her current life, in a gentrifying part of town and a Ph.D. program in urban history, is a long way from the blue-collar neighborhood where she grew up. (Aha! A source of conflict, which all mysteries need!) I added a little—no, a lot!—more conflict by giving her a teen-aged daughter. (Nope, I didn’t have them when I started the book. Mine were all grown up, another way I have perspective she doesn’t.) Her life has not given her much sophistication but it has given her a lot of what used to be called moxie. (Do I have that? Not really.) She is a single mom, whose young husband died in an accident. (I’ve been married a lot of decades.)

There was one more thing I needed. I could make long lists of all the protagonist qualities that would help to tell my stories, but the book didn’t start until I heard her voice. My stories need a narrator. Meet Erica Donato. 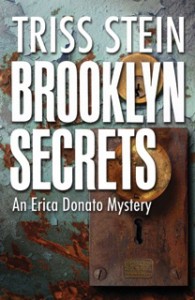 In Brooklyn Secrets, Erica is digging into 1930s research. You must enjoy research to set your character up to do so much of it. How do you approach research as an author?

I love doing research. I did it as a job in the business world for many years (I am trained as a librarian) but history, not business, is my real love. And it seems that social history, how people actually lived and thought and felt, is what speaks to me. Now I get to pursue my oddball interests to my heart’s content. The tricky part is remembering my job is to tell a story, with the history supporting that…and not the other way around.

Each book has been a little different, but for Brooklyn Secrets and the new work-in-progress I went old school and walked myself into the Brooklyn history room at the Brooklyn Public Library’s central building. (It is a system separate from NYPL). I sat down with a large stack of books, looking them over for the sources that will be most useful for my criminal pursuits. I ask for the clipping files too, and work through the news of the decades, looking for whatever pops out at me. Then I hop on Internet used book sites, such as ABE, and see if I can order up some of the books. Usually they are “used” books, not ”antique” books, and are priced accordingly, often for less than the mailing costs. For Brooklyn Secrets, I ended up with, among others, an academic study of girls growing up in Brownsville, a naive but thorough early history from 1969, and a volume of the photographic series, Images of America, called New York City Gangland. Those mug shots were most inspiring! Now I have them handy to peruse, refer to, write in. Lots of Post-Its will be sacrificed to the cause.

After awhile, themes emerge and important or charming or illuminating details are noted. Of course I do online research too, spot checking facts and—as one does on the ’Net—pursuing threads down unexpected paths well past the point of common sense. It’s a lovely way to procrastinate. For Secrets, I stumbled across an interview with the grandson of a famous Mob leader. He talked about his grandpa’s favorite film depictions of himself! Now that was a very odd disconnect between his mind and what most people call “reality.” And right there, in that gap, is where a story starts. Did I jump on that article? With a thank you to the Writing Goddess? You will find him, transformed by my imagination, in the pages of Secrets.

This is the third Erica Donato book. What advice to you have for mystery writers hoping to start a series themselves?

Think your protagonist through with as much detail as possible. I speak from early efforts that went nowhere, and from two long-ago books that could not carry a series. Does she/he have enough complexity to change over a series? Is her life/work/personal situation complex enough to provide secondary conflicts (conflict = plot) to go along with the main story line? Do you like her enough to spend a lot of time with her? Because you will spend more time with her than you ever expected.

Triss Stein is a small-town girl from New York farm country who has spent most of her adult life in New York the city. This gives her the useful double vision of a stranger and a resident for writing mysteries about Brooklyn neighborhoods in her ever-fascinating, ever-changing, ever-challenging adopted home. In the new book, Brooklyn Secrets, Erica find herself immersed in the old and new stories of tough Brownsville, and the choices its young people make. Learn more at her author site.