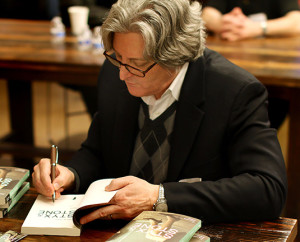 I met Jim Ziskin through Seventh Street Books. His excellent Ellie Stone mystery series—set in 1960 upstate New York and featuring a spitfire “girl reporter”— is published by them. I didn’t get to read the first book in the series, Styx & Stone, until this year and then I was HOOKED, and I’ve raced through them all since, including the one out tomorrow, Stone Cold Dead. I have to fret over the next time I get to read an Ellie story, but you don’t—go get hooked yourself. Now. Ellie is a great character, and this series just keeps getting better. I’m not the only person who thinks so, because Jim’s second book, No Stone Unturned just got nominated for an Anthony Award!

The best thing about being in the mystery community is finding the gems, but in this case I mean the human behind the books as well as the books. Jim is just a great guy, and I’m happy to know him. I’m also happy he was willing to subject himself to some questions so you can all get to know him.

I have to ask: What limitations or opportunities do you have, as a man writing a woman character?

There are many, of course. I can imagine a woman as a character, decide what she might do and even why. But the limitations of the everyday, personal experience simply aren’t there. I can empathize, sympathize, and watch—maybe even understand at times—but it’s not entirely coming from within.

Then again, I may be able to provide a different take on an interesting but imperfect woman. And I can draw the men who stand in Ellie’s way, both the well intentioned and the boorish, from the frame of reference of a person with a Y chromosome. Sometimes looking in from the outside is a useful perspective, and, of course, often it is not. I want to get it right, and I hope I succeed to some degree, well enough to write a convincing and compelling character.

Stone Cold Dead is the third Ellie Stone book. How is Ellie changing over the course of the series? 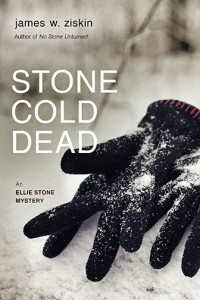 Ellie is gaining experience, growing older and wiser. She repeats some mistakes, of course, but she’s also building confidence and perspective, which she uses to put many of her failings behind her. As you know, she’s pretty much alone in the world, having lost so much of her family. But she deals with that grief by staying positive, a little wicked, and mischievously funny. One thing that doesn’t change in Ellie is her honesty. She is a highly moralistic character, even if her more libertine tendencies would shock prudish and abstemious sensibilities. Take her judgmental landlady, Mrs. Giannetti, for instance. And even her great partner in crime-fighting, Sheriff Frank Olney. Both disapprove of some of her choices.

What parts of Ellie’s world have come from your own experience?

Ellie is not me, but we share a lot: politics, sense of justice, taste, frustrations, and foibles. (Cough) Scotch. Basically we hate the same things. And she comes from a world I spent some time in but left: academia. Now she’s living in the small town of New Holland, NY, so similar to the place I grew up. But she and I have approached those life experiences from opposite ends, which is perhaps fitting, given that she is a woman and I am a man.

Seriously, Ellie is a crush-worthy character. Do yourself a favor.