Susanna Calkins and I met through Mystery Writers of America Midwest Chapter, but then we figured out a reason we might look familiar to one another—we both worked at the same Day Job University! We’re finding all the mystery authors who work there and forcing them into a fun club at some point. At the moment, Susie and I are kind of a club of two, planning a ton of events together this year, and at least one road trip. Not Thelma-and-Louise road trip. I said fun club. And it’s easy to have fun when Susie’s around, because she’s good people and also a very talented, award-nominated writer. If you like historical novels where the history is spot-on perfect, make sure you check out Susie’s Lucy Campion series. The third book in the series, The Masque of the Murderer, is out April 14.

What inspired your first book?

My historical novels, particularly A Murder at Rosamund’s Gate, were all inspired by the 17th century ballads and broadsides that I poured over when working on my PhD in English history. Odd accounts of the fantastic and strange, both half-true and half-sensationalized, these were the stories of the everyday people. In particular, I was fascinated by murder ballads. Over and over I would see the same story—that of a young woman found dead, usually strangled or stabbed, and in her pocket the locals would find a note, seemingly signed by her murderer. They would round up the suspect, who would then be arrested and thrown into a terrible jail, brought to trial, and usually hanged. I always wondered who the woman was, and had the man been framed. Answering those questions formed the premise of my first novel, and the bookselling world became the backdrop of my later novels as well.

You’ve said that you enjoy puzzles. What role do puzzles play in Lucy’s world and in the newest book?

I’ve always enjoyed puzzles and I think that is why I love reading and writing mysteries so much. As a writer, every mystery is a puzzle that needs to get worked out—for me, I want all of the pieces related to the main plot to fit together neatly. In my second novel, From the Charred Remains, the puzzles are explicit. Lucy has found a letter on the body of a murdered man, which she offers to a local printer for publishing in a true account about the Great Fire, which has just decimated London. What she does not realize is that the letter contains both an anagram and a set of acrostics that contain the identity of the murdered man, and which someone will go at great lengths to hide… It was actually harder for me to work out these puzzles than to write the rest of the novel. 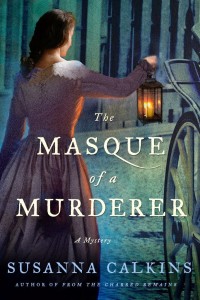 What do you wish you’d known about the world of publishing and promotions before your first book came out that you can share with aspiring authors?

Ah, if only it weren’t a cliché to say that what I don’t know could fill a book. And if I only had time to write that book. It’s fairly astonishing how little I knew about publishing even when I had a contract in hand. I had spent so much time reading books and blogs about how to polish the manuscript, query, get an agent, etc,—which did ultimately work for me—but I didn’t know anything about mystery conferences, or about terrific organizations like Mystery Writers of American and Sisters in Crime. Essentially, I knew nothing about networking. For me, its about maintaining an active online presence using social media that is comfortable for me (so essentially Facebook, blog, twitter), being authentic in my interactions with others (not making it all about me!), and finding ways to connect and collaborate with other authors so that we are helping and learning from each other.

Told you she was great. Check out her event calendar and mine for some of that  collaborating she’s talking about.