Big news: The Black Hour is a real book. I don’t have any yet, but THEY EXIST. With covers! And PAGES.

They also have spines with the right typeface! This is huge. 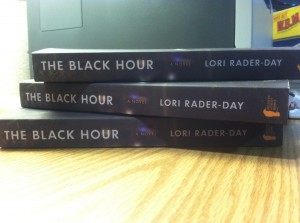 They still won’t ship until July 8, you understand, but if you’re at BEA in New York in a couple of weeks, look lively, because REAL books will be available.

In other huge news, The Black Hour got its first real review: a starred review from Booklist!

I’m so excited. Booklist is a publication that librarians pay attention to when buying books for their stacks. It’s one of the big four review publications.

What Booklist is saying about The Black Hour:

“After 10 months spent recovering from a gunshot wound, sociology professor Amelia Emmet returns to the classroom, delivering lectures on her now disturbingly familiar specialty: the sociology of violence. But Amelia’s welcomes are laced with an undercurrent of suspicion about her role in the shooting. How could the shooter, a troubled student who committed suicide at the scene, have been a stranger to her? The truth is, Amelia doesn’t know. Nathaniel, a new graduate student hoping to share Amelia’s dark area of study, snags his dream job as her graduate assistant. Amelia’s erratic behavior and battle to manage her pain make her a challenging boss, but he’s dedicated to her, especially since he secretly plans to study her shooting for his graduate thesis. Separately, Amelia and Nathan seek answers about her attacker’s motivation, goaded along by Rory McDaniel, a newspaper reporter. This accomplished debut bears favorable comparison to the work of Gillian Flynn (more Sharp Objects than Gone Girl), Cornelia Read, and S. J. Watson. Chicago writing instructor Rader-Day ably manipulates the elements that constitute academia’s dark side (competition, campus politics, quests for identity, and, of course, sex) without the overlong academic digressions these settings sometimes court. Amelia Emmet is a sympathetic, yet jaded and darkly witty main character. An unputdownable read.”

Unputdownable is my new favorite word.