I know Aaron Coats from my alma mater, Roosevelt University in Chicago. Specifically, I met Aaron at a recruiting event, and I must have said something he liked, because the next thing I know, he’s signed up and we’re peers. Aaron recently finished his degree, and I have to admit, I took a little pride in having recruited him, and in how hard he worked. We were alike in that way in our program. We were there to work hard and change our lives. Spoiler alert: Aaron did. Here he is: 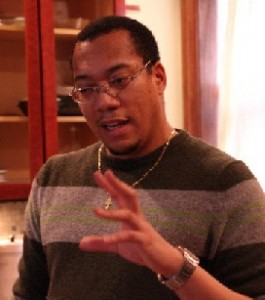 Who do you imagine is on the other side of the portal created when you put ink to paper? Not to be all Being John Malkovich on ya, but do you think the person on the other side of the page is more or less like you? Do you think you share the same desires, turn-offs, or even physical appearance? I’d never had these considerations until recently. I wrote a blog about it. Wanna read it? Here it goes.

Obviously, the medium is not quite the same in this digital age (as you no doubt read this on your laptop, tablet, or smartphone), but the essence of bringing images to life in the mind of another person through the written word is a wonderfully complicated and challenging endeavor. One I took for granted until just past the halfway mark of my master’s program. It was then that I encountered my first deer-in-headlights moment regarding the ever-present audience. It was a moment that made me realize the cultural implications of my writing to a point that I found myself questioning my blackness. Wowsers.

In the MFA program at Roosevelt University, I was the only African American male in most of my classes. By the end, “most” was long gone. Then I wrote a story that had several of my white classmates circling and placing little question marks above a term I used: high yellow. It’s a term I grew up with. One of classification. High yellow—a kind of slang term meaning a person, usually black or African American, of a lighter skin color—carries a historical connotation that implies lighter skin equals “better” when compared to darker skin. (i.e. The Talented Tenth discussion via W.E.B. DuBois)

It never occurred to me that my classmates weren’t familiar with the term or its history. Later that summer, I joined a writing group of all black members with Afro-American Studies backgrounds and they workshopped the same story. All I could think about was if I wrote “black” enough for them. In fact, it was because of that fear that I presented this piece to the group. Generally, I write about people who happen to be black. I don’t deliberately inject Afrocentric imagery into my work. I just write stuff I like and hoped others do, too. But once this idea of “audience” became actualized, I started to worry if readers would appreciate my writing. Is there an invisible line I can’t cross that I never knew existed and now I must dig in the hot sand with my bare hands to find it before the next idea for a piece of fiction comes to mind? Nope. Not even a little. I eventually decided that it was okay that not everyone would “get” everything I wrote. Just like if no one reading this notices the “In Living Color” reference I made above. But that’s how we grow as people, as consumers of literature, and as writers. (insert “The More You Know”… graphic and jingle here)

So I think that’s the key: write for you. Not for the people on the other side of the portal. You absolutely have to be aware that these people exist. Shoot, you want millions of them to exist and each be willing to purchase a copy or twelve of your work. But also know that you can’t please all of them. You can’t relate to all of them. And that’s fine. Because writing should never make you question who you are. It should help you to discover who you are.

Aaron Coats is a born and bred South Side Chicagoan. He is a graduate of the Creative Writing MFA program at Roosevelt University and holds two bachelor degrees from the University of Illinois in English Literature and Rhetoric and Creative Writing. An aspiring screenwriter and fiction novelist, Aaron strives to contribute positive, lasting, unique ideas to the literary and film arenas. He is a strong advocate for the educational advancement of our struggling youth and plans to teach writing composition and English literature one day. He is also the screenwriter of Faux Pas, a short film that is currently traveling the festival circuit around the country.