I really did break my arm last week, so I asked a few friends to help me freshen up the content while I tried to get my typing back up to speed. One of my newest writing friends, Lynne Raimondo, obliged. Lynne and I have the same publisher, and live not to far away from one another, so we decided we needed to meet. One lunch later, and I have a crush. She’s funny, smart—and if you haven’t had the pleasure, check out her book Dante’s Wood. She loves to mess with her characters as much as I do with mine. Which is a lot. Here’s Lynne: 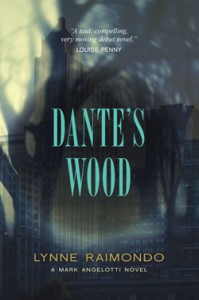 A friend of mine commented recently that I must be feeling pretty relaxed these days after giving up my day job to write crime novels.  When she saw my dubious expression, she added, “But seriously, except for deadlines, you can’t be under that much pressure.”  The remark caused me to think hard about why, well into writing my third novel, I’m still waking up at 3 a.m. with my stomach in knots.  I came up with this list of craft issues, which I thought it might be fun to share with other writers.

1. Keeping it real.  It’s fiction, so we can be excused a factual error here or there, right?  But as a reader, nothing pulls me out of a story faster than a glaring inaccuracy.  And who wants to be the subject of one of those cringe-inducing ‘gotcha’ posts on Amazon where the reviewer points out that the entire plot rests on a legal/scientific/whatever fact that’s just plain wrong?  Even after researching a topic to death, it’s not knowing what you don’t know that could kill your novel.

2. Keeping it fun.  Yes, accuracy is important, but people don’t turn to fiction for a rehash of yesterday’s headlines.  They want to be entertained.  Too much focus on what happens in the real world can lead to what I call ‘teachable moment’ syndrome, where every other sentence sounds like it was pulled from an encyclopedia.  Getting that balance right — between realism and story-telling — is another of the issues that keeps me up at night.

3. Spelling and grammar errors. Not something a traditionally published author needs to worry about, since the copyeditor will catch them, right?  Not exactly.  Long before your precious baby arrives on the shelves at Barnes & Noble, it’s going to go through the hands of a lot of people — your agent, your editor, all those famous authors you hope will read and blurb your novel, to name just a few.  You want your manuscript to look its very best at every stage during its journey to publication. And copyeditors are only human, after all.  Unfortunately, the best chance you have of ridding your published work of typos is to catch them yourself — all of them.

4. Coincidences.  They happen in real life all the time, so what’s wrong with them?  Plenty, if they’re overused.  Readers are quick to notice and comment on a string of chance happenings that sound . . .  well, just too good to be true.  On the other hand, I’ll bet the ranch you won’t find a published novel out there that doesn’t rely on at least one coincidence to move the plot along.  Once again, the issue is finding the right balance.

5. Melodrama.  I admit to liking books that elicit a strong emotional response — if not a good cry — from me.  But I’m just as quickly turned off by those that tell me how I’m supposed to feel, with lots of adverbs and exclamation points to make sure I’m following.  Tragedy is a part of human existence, and a writer who doesn’t explore it in some fashion is IMHO limiting themselves.  But it needs to be done subtly.  Creating emotion on the page without resorting to pyrotechnics is hard work and all too easily mishandled.

6. Too formulaic or not enough?  Readers, especially readers of genre fiction, expect books to adhere to a certain basic formula.  And unless it’s so-called literary fiction, the ending better not be a complete downer.  (If you don’t believe me, check out the thousand-plus reader reviews of Gillian Flynn’s Gone Girl.)  But too much sticking to the rules leaves your book with little chance of standing out in a crowded field, not to mention BORING.  How to satisfy reader expectations while coming up with something new is one of an author’s biggest challenges.

7. Introducing your villain without giving too much away.  I’ve only written two novels (three if you count the one hidden away in my attic) but each time I’ve introduced the murderer I’ve felt like I’ve just emblazoned their forehead with a sign saying ‘I’M THE BAD GUY. WATCH EVERYTHING I DO.’  Unless you’re willing to totally bamboozle the reader (more on this below), this is a major headache for writers of mystery fiction.

8. Keeping your protagonist sympathetic.  You have only to read the first chapter of my debut novel, Dante’s Wood, to glean that I like flawed characters.  But how flawed is too flawed?  Will the MC you’ve endowed with enough snarky qualities to make you squeal in delight come across to readers as a person they’d sooner see tortured by your serial killer than spend 300 pages with?  Lean too much in the other direction and you run the risk of creating a Mary Sue.

9. Playing fair with the reader.  I hate, hate, hate deux ex machinas.  Forget Roger Ackroyd, where you can at least tell that something is up with the narrator.  I’m talking about the FBI agent with a degree in nuclear physics who shows up at the very last second to rescue the world from otherwise certain doom, or the sudden discovery that the murder victim is really alive and well and living in Tasmania. Yes, every suspense novel requires a bit of lying to the reader, but there have to be clues they can follow, developments that are hinted at, or a groundwork laid for what eventually happens.  Placing those breadcrumbs on the trail while trying to keep the reader guessing requires some serious mental gymnastics.

10. Is it any good?  Need I lay all my insecurities on the line?  Suffice it to say that  putting your work out there to be judged by thousands of folks who could care less about you is SCARY.  And those doubts doesn’t go away — even after you’ve snagged a few decent reviews.

What about you? What about writing keeps you up at night?

Well, now that Lynne has given us all something new to fret about…let her book Dante’s Wood keep you up at night. The sequel is out next year—be ready!