Death at Greenway is an Agatha Award nominee!

Well, this seems like a full circle moment! I’m so excited that Death at Greenway is a nominee for the Agatha Award for Best Historical Novel! I’ve long attended Malice Domestic, where the award is voted upon by its attendees, and I really hope I can attend this year. In person? That’s what they are saying!

Best Historical Novel—it makes me think of how seriously I took that word, “historical.” What IS a historical novel, especially when you’re playing with fiction within a truly historical context? How historical do ya need to be? Well, for Death at Greenway, I went all in on the research in a way I still don’t fully understand, when people said, hey, why don’t you just FICTIONALIZE IT, like the fiction writer you are? And I did! But when I could know the truth, I sought it, and I used it. There was just… so much to know. I wanted to know it all!

And that deep dive into Agatha Christie, into her house and its role in the war, into that community, those people, and all they went through and did for the war effort? That is what I’m most proud of. Award nominations are very nice, don’t get me wrong. I couldn’t be more excited to have this nomination for this book.

And with some serious contenders and fellow nominees! Check out the full list here.

Who wants to have tea in Bethesda? 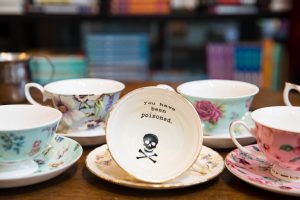