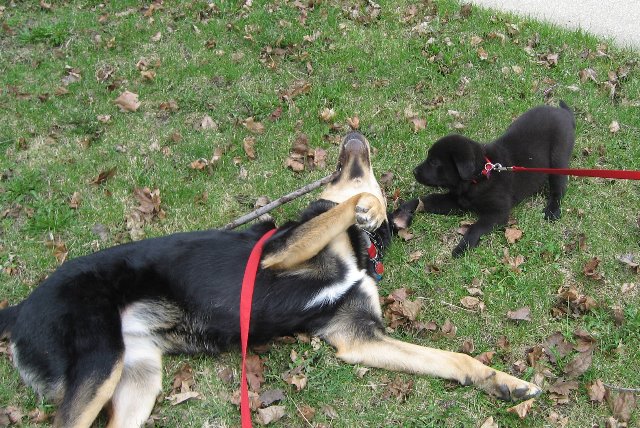 Been a big puppy day around these parts. I took Ursa to the dog park so she could foam at the mouth (she really does this) and run off lots of punk, and then we stopped by Mary Anne’s condo to play some more with Ellie. My dog is so dang tired, and she doesn’t even know what I know: That we’re going to go down the street to play with her dog-friend Chloe later. (You kids have been hankering for photos, so here’s one for you. Little tiny Ursa meeting big-girl Chloe, also a puppy, actually. I’d miss those puppy days except that I remember how I felt after three days of no sleep whatsoever. I was grateful—GRATEFUL—when Ursa only got up every second hour to potty.) Anyway, it’s National Wear Your Dog Out Day. I’ve just proclaimed it.

Just read an article about first readers. Who reads your work before anyone else? Let me just tell you: For me, it is not my husband.

Once a few years ago, Greg suddenly took an interest in this so-called creative writing I was spending so much time and effort and household budget on. He asked to read a story. I printed out a story for him and left it on the dining room table. This is when he used to work in an office. Now I would leave a story on the dining room table and direct his attention, three feet away, to its presence. But this was then. I left it there, and there it sat for days. Weeks. I finally took the story back and just like my dad used to do (and his dad before him) when he fell asleep in front of the TV and I took the remote control to change the channel, my dear dear husband asked me, “Hey, what happened to that story?”

So I gave it back and something even worse happened.

Writers, can you imagine? Nothing?

Eventually I had to sit him down and explain to him the bruised flower petal that is a writer’s psyche and that, if he asked for a story and I let him read one, he had to say something. We didn’t have to do book club. But he needed to say, “I liked it.” End of instruction. Just say you liked it, and I will not ask you to debate characterization techniques or the balance of scene and summary. I will just say, “Thank you,” and that will be all.

I guess my actual first reader is my friend, James. (Hi, James!) Or my writer’s group. Simultaneous first reading, I guess, this week. I’ve got a story being critiqued on Sunday, and James also has a copy of it. The writing group is pretty vast and varied, but the people who actually show up and give comments (this is a rather small sample) are skilled writers.

The best reader I’ve ever had is, no surprise, the director of my MFA program. That guy is the real thing. But he’s not being paid pittance to direct my work anymore, so I have got to be the best reader for my own work now. And, really, that hasn’t been a problem. In fact, most of the stories I’ve placed have been stories that were read only by me or only by one or two people (James and my director, actually) before they were accepted. I could do the numbers here, but that might be discouraging to students in MFA programs. Or would it? Is it good news or bad that you are going to be the best reader of your own work?